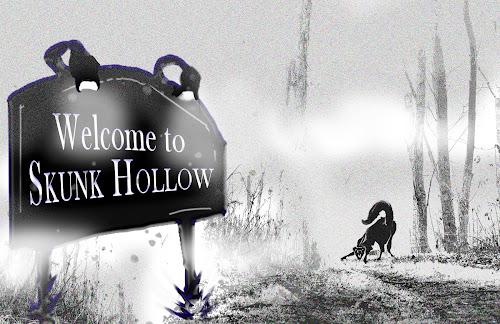 In medieval times, the area was mined for precious metals. A mysterious plague cleared the tunnels of miners. Greedy, royal families transformed the mine into catacombs, arrogantly equating their own bodies & treasures with that of nature's rarities. In any event, the spooky aura of Skunk Hollow promised to protect the catacombs since the place smelled of carrion. The stench was so strong it floated about as dense clouds. Were the native skunks trying to keep trespassers away, or the cause of the plague? The true role of skunk spray is revealed during gameplay. 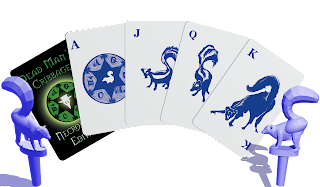 The dead were hastily interned by gravediggers donning plague masks. Few lived long enough to really study the mystery, but the smell of skunk spray became ever-associated with dead spirits and contagion. 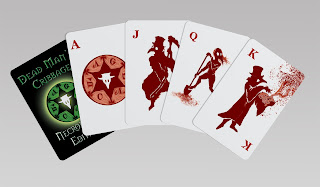 Necromancers sought to steal the crown jewels from the buried royals of Skunk Hollow. With the fog being poisonous, and the dead difficult to locate underground, the sorcerers relied on their skills. The grave-robbers brilliantly decided to raise the dead by spellcasting, and have the treasures brought to them. Let the dead do the work! So the alchemists performed the necessary rituals (the location hereafter known as Ground Zero).

The Deadmen did rise, but they did not submit their treasures. They were enraged to be disrupted from a peaceful slumber, by thieves! The cowardly necromancers fled as the uncontrolled undead chased them out. 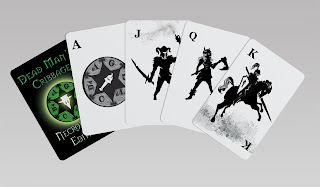 Local, policing Heroes arrived too late at Ground Zero, observing the dead emerge from every tunnel entrance. They raced back to the Sanctuary to warn humanity. The Heroes had come to stop the villainous Necromancers, but both bit off more than they could chew. The royal Deadmen were hungry for justice .... and suspected every trespasser.

Play as a cowardly Necromancer fleeing the scene, a Hero running to warn humanity, a mysterious Skunk; or... play as a Deadman chasing them down! 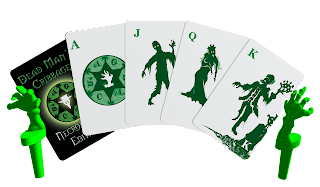 "Deadmen are coming!" the Heroes warned anyone in earshot. They turned a bending road wrapping the mountainside, forever known as Dead Man's Curve ever since this fateful event. The brave, well-intentioned Heroes almost made it back to town when the ground suddenly quaked. A gaping crag opened up with hundreds of clawing, jeweled hands tearing the ground from under.

How expansive were those mines? The mass of deadmen's hands groped and pulled many victims down. All the chasing zombies clambered back into the earth through this crevice, as if knowing that the spells keeping them animated did not persist outside Skunk Hollow. Noxious charnel scents emanate constantly still today (regarded as "Dead Man's Hole"), but whether it be skunk-spray or forever-rotting corpse-stink, no one knows the difference. Outsiders all call this zone the "Stink Hole" and warn anyone crossing it.

(roleplay a present-day travesty with a separate deck of cards). 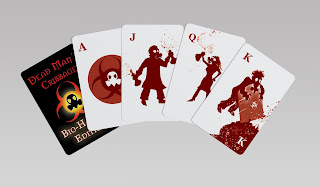 Ignorant and greedy like all other humans, Scientists needed to dump excess bio-reagents somewhere. It was easier to avoid regulations and good-conscience by finding an abandoned site like Skunk Hollow to dump it. These Scientists did not believe in folk tales about the undead, but the powerful scents encouraged them to wear proper Personal Protective Equipment (respiratory masks). There was no way their reagents would resonate with corpses, so they thought. Oops. Ground Zero re-energized. The dead rose again, this time chasing out villainous polluters. 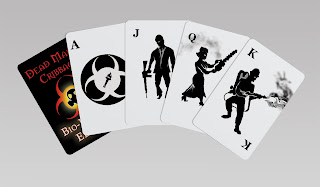 Heroes from neighboring towns, from a mere three "hollers" away, investigated the convoys of trucks crossing over the Stink Hole.  They arrived too late. The evil scientists had dumped their pharmaceutical waste, and now Deadmen roam. Run!

This showcases the Dead Man's Cribbage game by unboxing it. Learn more about the game at:  http://www.deadmanscribbage.com/   "Trad... 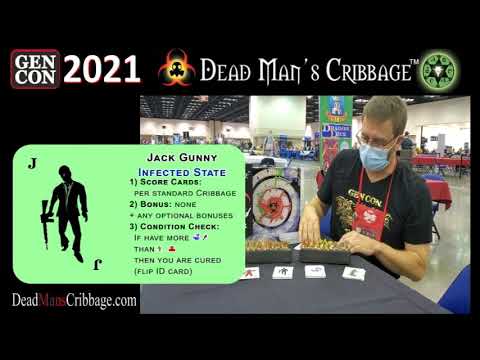